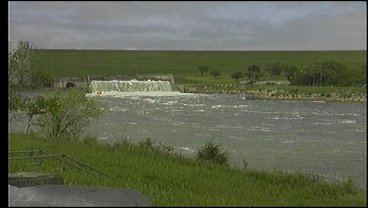 Friday we told you about the rising water level on Lake Texoma. Now with even more rain, the lake is up almost ten feet and could go a little higher. KTEN's Deeda Payton reports.

Lake management says they are under "flood operation," but that the water level would have to rise four to five more feet for flooding to be an issue. However, East Burns Run and Lakeside in Bryan County are still closed due to elevation.

Right now the discharge at the dam is releasing 157,000 gallons per second.  Assistant lake manager, BJ Parkey, says before it started raining last week the level was just above 615 ft. and right now it is just above 624 ft. But, he says, not to worry because the flood control pool is only about 28% full.

"The rain we got last night fell on the Washita arm. We should be receiving that rainfall on the lake probably May 8th." Parkey says they predict the elevation will rise to about 625 ft. by Monday once the rainfall flows down from the Red and Washita River.

By Memorial Day Weekend, they predict the level will be back around 619-feet which is average for this time of year.