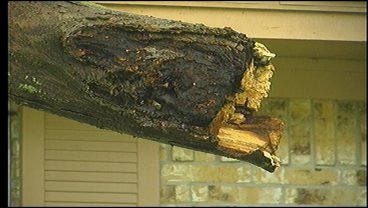 If it wasn't the thunder and lighting, it was the rain, wind and hail that rocked you out of bed Tuesday morning.  For one family, it was a huge tree limb falling on their house at 5:00 a.m. that got them out of bed. KTEN's Deeda Payton reports on the damage in Denison.

"We had numerous calls at the same time, possible structure fires, trees into houses and just getting everybody busy at the same time." The Denison Fire Department had every truck out responding to calls through the night and into the morning. "This storm come through last night with wind and lightning blow this tree here down and blew tree down on this house."

The homeowner, John Nunley, says he couldn't believe what happened to his house in the 1300 block of west bond street. "I thought a tornado came through here first. Either that or straight line winds. Something. The tree is not rotted so something hard."

He says the tree poked holes in his roof when it fell over onto his home causing his living room to flood among other things. "Broken tresses, limbs through my ceiling and attic and the insurance man calling me, but it's a lot of damage."

Other damage from last night's storms came in the form of downed power lines and fallen tree limbs. Damage that kept city workers and power companies busy, more proof a Texoma Twister is not the only thing that can cause this much damage.

Nunley says he is still waiting on an estimate of the total damage from the insurance company.