Flu Case At Austin College Has Administration On Alert 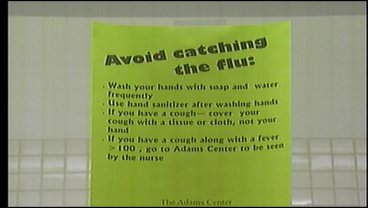 Students and faculty and staff at Austin College were warned Tuesday. A professor, who taught a class on Monday, is now isolated at home with the flu, waiting on results to determine whether it's the H1N1 virus. KTEN's Jhen Kordela has how the campus is reacting.

The faculty met at 11 a.m. Tuesday, and again at 4:30 p.m., to discuss the situation at hand. They've also sent out a campus-wide e-mail to inform students the professor does have type-A influenza, or the common flu. While the campus is taking preventive measures, it still expects finals and graduation to go as planned.

It's a situation schools all over the country are having to deal with.

"My high school's closed down back home," says Shireen Jahedkar, a student at Austin College.

Now, Austin college is one of them.

And, much un-like our justice system --  innocent until proven guilty --  the CDC wants public places to treat each possible case of H1N1 as if it were the real thing.

"We've taken some of the precautions we've taken because health officials have advised that we should assume an H1N1 case, although we don't have anything to suggest it is that case," says Tim Millerick, VP of student affairs.

That's why Austin College's one known flu case is under house arrest, and officials spoke with the 26 students he came into contact with before he was treated.

"I always wash my hands," says Katie Barrett, a student. "I'm concerned about other people washing their hands."

KTEN checked with the Grayson County Health Department. Officials there say there are no confirmed or probable cases of the H1N1 virus in Grayson County.