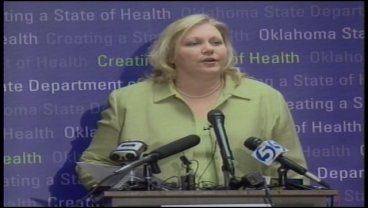 The announcement occurred at an 11am news conference Tuesday in Oklahoma City.

Oklahoma health officials say they have identified the first confirmed case of swine flu in Oklahoma.

The patient in Pontotoc County in southeast Oklahoma did not require hospitalization and is expected to make a full recovery. The person became ill after returning from a trip to Mexico.

Oklahoma joins 38 other states with cases of swine flu confirmed through the Centers for Disease Control and Prevention. More than 400 cases have been reported nationally, and one death, a toddler from south Texas.

Oklahoma doctors are routinely sending in samples from patients with flu-like symptoms, and several of those have been sent on to the Centers for Disease Control and Prevention for further testing.

KTEN's Meredith Saldana is speaking with Pontotoc County Health Department officials and will update this story Tuesday on KTEN News at 5.