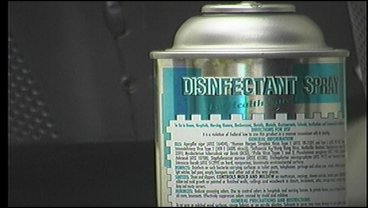 There are still no confirmed cases of the "H-1-N-1" virus in Oklahoma. More than forty confirmed cases, though, in Texas. And now, after all the hype, scientists believe it may be no more deadly than the regular flu. Still, local schools are taking every precaution. KTEN's Deeda Payton spoke to Denison's Superintendent.

According the Centers for Disease Control, 60-percent of cases in the U.S. Have occurred in patients under 18.

Two weeks ago word quickly spread about the spreading of H-1-N-1 commonly referred to as swine flu. Now schools are doing everything they can to contain the virus. "We took precautions immediately when we were told what the situation was."

Dr. Henry Scott, Superintendent of Denison Schools, says they have their custodians cleaning the classrooms, restrooms and other facilities three times a day with disinfectant. He says their nurses are on high-alert for any student exhibiting flu-like symptoms. And, they have canceled all field trips and extracurricular activities for the time being. "I think what parents want to hear is that we are doing everything in our power to protect your children and we are."

Dr. Scott says at this time they do not have any cases of swine flu in the district or in Grayson County. He says they did send off cultures for one student suspected of the virus to the state, but those results were negative. "If we see widespread flu across the district we would consider as other districts have of shutting the district down."

The swine flu outbreak has led to the closure of hundreds of schools in Texas affecting about 350,000 students.

According to the CDC, 41 cases of H1N1 flu and one death have been reported in Texas. There are still no cases in Oklahoma.