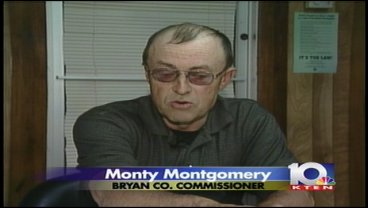 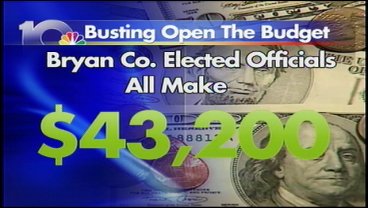 Of course, Bryan County has seen its share of jail inmate escapes over the years. The sheriff blamed it on lack of funding  for security and salaries.

And while the Bryan County Jail does get more money allocated to it now than in years past, salaries are still relatively low.

So, we're busting open the budget with a Special Assignment Report on how your tax dollars pay your county workers, specifically your elected officials. KTEN's Lisanne Anderson reports.

Montgomery is one of three Bryan County Commissioners who set salaries for all county employees.

And to get initial top salary, Commissioners in Oklahoma have set guidelines from the Oklahoma legislature.

Section 1A, Title 19, of the Oklahoma Statutes spells it out in black and white, with a set base range, then Commissioners literally do the math, using population and estimated property tax coming into the county.

Bryan County falls  in  a net property valuation of between $80 million and $300 million, meaning minimum salary for elected officials can be anywhere between $24,500 to $44,500.

Your elected officials in Bryan County make $43,200 a year, a salary that hasn't increased in at least four years.

"Right now, there's now additional money at all for any county elected official."

"Why not?" Lisanne asks.

"Because our budget isn't big enough to take care of that."

Part of the reason: the debt from years ago to remodel the Bryan County Jail... a sixth of the county sales tax still pays more than $13,000 a month to reduce that debt.

Commissioners hope to have that paid off next year, with that money then going back into the county general fund.

As for salaries though, it still comes down to population and property tax.. and as the county grows, so does the opportunity for increased salaries.

"Bryan County is not overly blessed with finances but we're not in financial hardships we were a few years ago."

And that's just one example. Those are the numbers and formulas for Oklahoma's county elected officials, depending on county size.

One interesting note is that no matter the experience and time on the job of the elected official, in Oklahoma, they all make the same amount of money.

In Texas, it's a much different set of rules. County Commissioner can budget just about whatever the county can afford.

Below are lists of salaries received from local municipalities, obtained through Freedom of Information requests. Every government agencies contacted by KTEN News was very cooperative, sharing this public information without any hindrances.

Do you want KTEN News to check out your county, city, or school district. Drop us an email to newsteam@kten.com or call the newsroom at 903 337-4010.