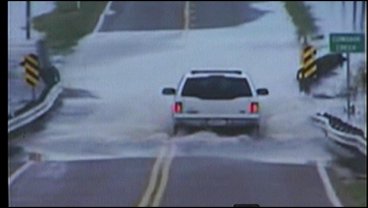 A Pryor women died Saturday night in Mayes County after driving around closed barriers into floodwaters. During severe weather, flooding is just one danger on the road.

Rain also makes it hard to see and according to officials speeding is the top mistake drivers make on wet roadways.

Other mistakes, overcorrecting when sliding and using your brakes. Officials actually say not to use your breaks on wet roadways, because most of the time brakes make the situation worse.

Steve Nabors, a licensed driving constructor and Oklahoma State Trooper advises, "When our vehicles go out of control, we actually tell our troopers to let go of the steering wheel because the vehicle wants to drive straight.   It is will correct its self faster than a human being can correct it."

You heard it from officials, let go of the wheel.

Also, when hydroplaning tap the breaks lightly, but it is best if you do not use them at all. Allowing your car to slide and gradually slow down will prevent further injury.

When it comes to high waters along the road, stop, turn around! Do not drive through high waters for any reason.

Officials say the new motto when referring to high waters is "Turn Around Don't Drown."