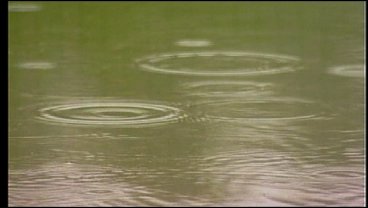 As of 10pm Saturday night there were no new road closures in Grayson County due to the latest rain event, but officials warn with more rain expected overnight to take precautions when headed out. There may be flooding in low-lying areas.

On the Oklahoma side, Turner Falls Park in Davis has been closed due to the rising waters and campsite reservations have been canceled.

This past week we saw flooding along city streets and county roads and there is a chance we'll see that again. For one Denison man rain means it is time to break out the broom and shovel to protect his property from rising waters.

"Every time we get a good, hard rain, I'm down there sweeping water and stuff, digging around my place to keep the water from coming into my place," said Curtis Madden.

Madden lives in the 600 block of Martin Luther King Street and has dealt with the flooding problem for 20 years. He says city crews have been out numerous times but officials never seem to fix the problem. Now, he says he is fed up.

Madden says he'd like the city to put some drain pipes through his neighborhood, because he's tired of floodwaters damaging his home.