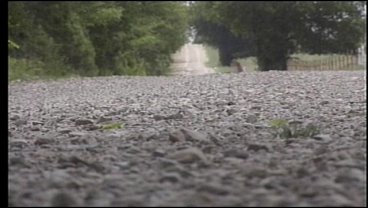 Imagine going more than a hundred miles per hour on just two wheels!  A motorcycle chase that started in Dallas County ended up in Marietta, the driver trapped at a dead end road.   KTEN's Meredith Saldana was in Marietta and has more on this story.

Several departments from Texas and Oklahoma tailed the driver trying to get him to pull over.

In fact, a road block was even set up in Love County but it didn't stop him.

The only thing that did put a damper on his high speed joy ride was a shortage of gas.

So he got off the highway at exit 15 in Marietta where he continued his journey through residential streets.

But his trip was cut short when he turned onto dead end road.

Police then pulled their guns and made him lay face down on the ground where he was then arrested.

Marietta residents I spoke with said they were concerned when they heard the commotion.

Marshall William says, "I thought it was a high speed chase out here.  Because I though it was the ambulance and it was police cars."

Crystal Camaro says, "I was just laying on the couch and heard a bunch of sirens and looked out the window and there was just a whole bunch of cops passing by.  It was kinda crazy."

Richard Patterson, 28, is being held at the Love County jail.

He is facing several felony charges including failing to stop at a police road block.

After being charged in Marietta he will be extradited to Texas where he will face additional charges.

Police say when they arrested the man he said he didn't want to stop because he had unpaid traffic tickets.