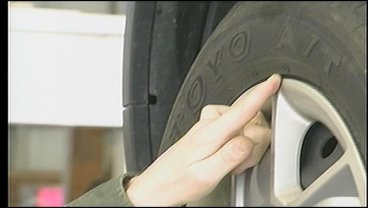 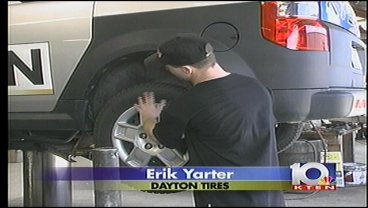 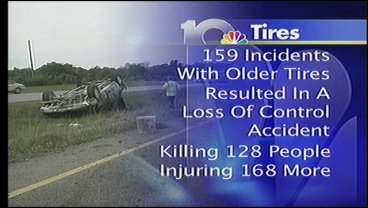 It's something we do everyday: hop in the car and hit the road. But there's much more to it. You could be driving on danger.

"It's almost 100 percent of people don't know whether they have new tires or not they just like you said, they think they had them put on that's it."

Your new set of tires, the only thing between your car and the road, could be older than you think.

"There was a customer in just the other day that had tires said they had just put them on two years about but they were six and half years old, so I don't know what happened at the time they were put on, I wasn't there, but it sure does kind of seem a little shady."

The government requires tire manufactures to imprint the date the tire was made right on the rubber.

"Well, you have your DOT, which will be stamped on the sidewall of a tire... DOT, and the first two letters represent where the tire was made, you know manufacturing, but what you want to look for is the last four digits of number, for example 5107 means the tire was made the 51 week of 2007."

But it's not as easy as you'd think, to find out if your new tire is in fact old. The DOT number is usually imprinted on the inside wall of the tire.

Barry Harmond, with Dayton Tires in Sherman, even surprised us when we put our car up in the air, to find out exactly when our tires were made.

Even though we purchased them in May of 2008, the tire was already six months old before it was put on our news vehicle as "new."

"It's new in the sense that I mean the tire store probably bought them in 07 and just had them there, they probably had more and just those four they had quite a few and then we you happened along you had those put on, but a tire is good up until about 10 years so, after 10 years you want to replace them."

While a tire may be ok to drive on for 10 years, the manufacturer warranty is void after six, and Dayton Tires safety coordinator doesn't recommended you purchase a tire six years after it was made.

"First thing you'll notice is some cosmetic scratching right in through here, something they'll get deep but it won't look like this. You can definitely tell this is a newer tire. The easiest way to tell is look at the DOT number, the last four digits will be your date, the first two being the week it was made, the second two being the year."

But just how dangerous is an older tire?

"The risks would be an older tire would develop a slow leak, as opposed to a quicker leak, slower leaks lead to blowouts that's how blowouts happen, it gets low, it gets hot and the air has to go somewhere, and so, it's definitely a danger."

According to a report submitted to the National Highway Traffic Safety Administration, 159 incidents involving older tires resulted in a loss of control accident, killing 128 people and injuring 168 more.

To make sure you and your family are safe, check your tire date.

"The easiest way to do it, you could bring it up here and we would be happy to lift it up in the air and look how old your tires are, or if you want ot crawl underneath and get a flashlight you could do that too, either way."

And don't forget to check your tire pressure and tread, as well.

"There's a lot of dangers, the biggest thing would be if you don't know where to start from then you don't have a point to go to , you know everyone know there is a particular.  Well, everyone needs to know that is usually tells you on your door about the air pressure, those are all factors just know the age, how much tread you have on the tire, you know we use tread def gages, which have thousands of inches, most people though can use a penny and the way to do it is insert it top side down and keep your finger where the tread touches, as long as you can see the top of his head, you're ok. If the finger is up into here, you need to replace your tires."