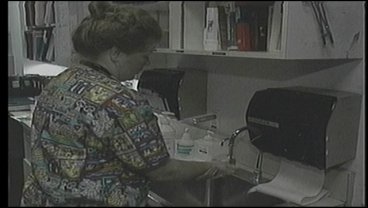 Health officials say even if you received the flu vaccine this year, the swine flu is different, and that vaccine wont protect you, but there are things you and your family can do to avoid it.

The Department of Homeland Security declared a public health emergency, but getting that urgency to the public isn't as easy as it sounds.

Vince Cox says, "It just doesn't concern me that much, I've seen this stuff come and go."

Kennis Blankenship says, "I'm not concerned at this point. I don't see it here."

Health officials say although the swine flu is responding well to antiviral medication, there's no vaccine, so that flu shot you got months ago won't protect you.

Denise Wardell, R.N with the Grayson County Health Department says, "It won't protect you from this flu because it is totally different."

Melissa Tidwell with the Bryan County Health Department says, "It contains the swine flu, influenza that we normally see in people, avian influenza and an Asian influenza."

Wardell says, "Breaking the chain of transmission from human to human us what's going to be necessary."

So how do we stop the virus? Health officials say: wash your hands, and avoid touching your face. The flu can enter your body through you eyes, nose, or mouth. Also, carry an alcohol-based hand sanitizer, and cover your nose and mouth with a tissue whenever you cough or sneeze. Plus, avoid sick people.

Good news is some in Texoma are changing their habits.

Nomenia Dilday says, "Since there are cases in Texas, I am worried, and we'll be washing our hands and maybe using some of that hand sanitizer."

Danae Hernandez says, "I'm a lot more cautious about standing next to people and touching things like door nobs. It kind of worries me since I heard about that."

The CDC says symptoms of the swine flu include: fever, coughing, sore throat, body aches, headache, chills, fatigue and in some cases diarrhea and vomiting.

Amanda Ortez with the Grayson County Health Department says, "Be proactive instead of reactive and have a plan for your family. Make sure your following personal hygiene practice and frequently wash your hands."

Although it's called the swine flu health officials say you cannot get the virus from eating pork. Plus, if you do feel sick, don't go to work or school, see your doctor immediately.