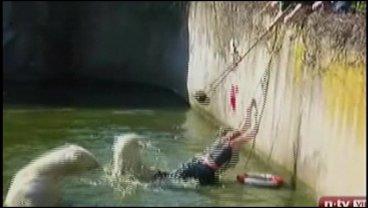 A polar bear attacked a woman at the Berlin Zoo Friday afternoon.

The pictures show what happened after she climbed a fence and jumped into its habitat during feeding time, accrording to police.

One adult polar bit her several times after she plunged into the moat, police said.

Zoo workers tossed rescue rings toward the woman to hoist her out and distract polar bears swimming nearby.

The woman was severely injured and was being treated at a hospital, police said.

It's unclear why the woman entered the bear habitat, but police issued her a citation for trespassing.

A WARNING: The video provided to KTEN-TV by CNN is graphic and may be disturbing to some viewers.