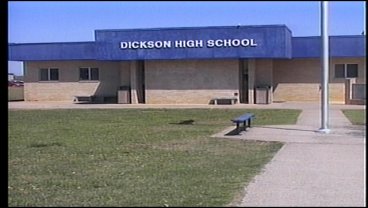 Good news for some Oklahoma high school students.  Four districts in southeastern Oklahoma were just honored by The State Regents for Higher Education.  Madill,  Dickson, Idabel and Savannah high schools were among only eleven to be honored.  Meredith Saldana met with the elite group in Dickson.

Peek into any classroom at Dickson High School and it looks just like any other, the reading, writing, arithmetic.

But this year's high school seniors have a new accolade to add to their college applications, among the best in the state when it comes to the ACT.

Senior Madison Donica says, "I'm going to Oklahoma State University and they definitely a lot of their scholarships that are based on your ACT score.  So, I'd say it's very, very important."

Sara Kerkstra says, "I think that also it's gonna help a little bit with my financial situation because that's a little bit hard for me because my family's kind of in bad times with the economy and stuff which is a lot of peoples problem."

Keely Thompson adds, "I think it's super important because you have to have an 18 so you don't have to take remedial classes in college and those are classes that you have to pay for but you don't get anything out of as far as credits and so I think it's important to take it."

Senior Brea Jones says, "I have received the Academic Scholars Scholarship which is based mostly on the ACT so it pays for most of my schooling.  So that's very neat for me."

So what's the key to preparing the students?

Dickson schools start giving 8th graders and sophomores ACT "pretests" to help get them ready for the ACT.

This year's seniors had some advice for those younger students.

Jeremy Vinson says, "Just to try your best and don't be nervous when you take it."

Donica adds, "I think it's one of the most important things you do in high school."