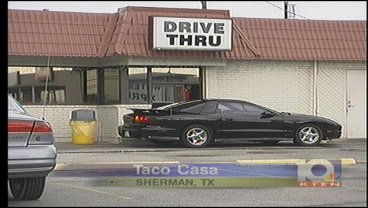 In this week's "Behind the Kitchen Door," you rely on them for a quick food or caffeine fix: convenience stores, coffee drive-thrus and food courts. KTEN's Katy Blakey has a rundown of these popular stops in Grayson County and how they're scoring on their health inspections.

Health inspectors paid a visit to the Lucky Stop off Crockett St. in Denison one month ago. Here's what they found inside: "Interior floor cabinet...lightly soiled." "Rodent-like droppings observed" and no certified food manager on duty." These violations earned the Lucky Stop a "B" on their inspection.

Another quick-stop, we made was to the Allsup's in Pottsboro. According to the health report, inspectors say employees were not wearing hair restraints and no permitted food manager was on duty. They also found several areas dirty. The Allsup's on FM 120 scored a "B."

Inside Midway Mall two quick stops for shoppers didn't fare much better. At the Corn Dog, the restaurant received demerits for employees washing their hands in the wrong sink and not having a chemical bottle properly labeled. The Corn Dog also earned a "B" on their February review.

Inspectors also paid a visit to the Great American Cookie Company inside the mall. Employees were observed not washing their hands after coughing, and not wearing a hair restraint. Floor surfaces were also found soiled. The cookie company scored a "B."

Now to some good grades in Sherman - The Starbucks off Highway 75 was given a thumbs up on March 4th, earning an "A." The Taco Caso on Texoma Parkway was inspected March 11th. It earned an "A," too.